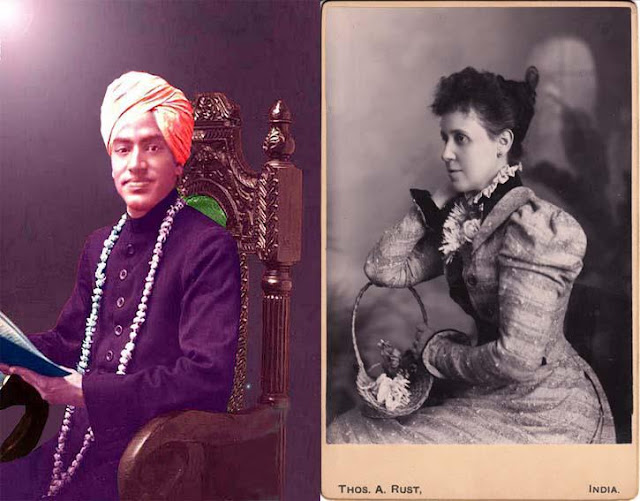 Julian Rust was an Italian Photographer in Mussoorie. He was so enchanted by the Perfection of features and absolute majesty of Shri Nathji that he insisted that he be allowed to make a portrait of Shri Nathji. He made an incredibly beautiful picture (which I have posted) and placed it on the showcase. Julian Rust use to run the photography studio with his father Thomas A Rust. The first record of Thomas Rust as a photographer is in 1869 when he worked as an assistant to F.W. Baker in Calcutta. A year later he was running the Calcutta Photographic Company with W. T. Burgess and did so until 1874. . In 1874 Rust opened five of his own studios in Allahabad, Mussoorie, Murree, Landour and Meerut. Thomas Rust's landscapes are considered very artistic. His son Julian joined the firm in 1899 and continued until 1930." Later the father son due only maintained two studio’s. One in Mussoorie and other in Allahabad. Julian’s mother was Julia and he had a sister named Elizabeth. Research yielded Julia Rust aged 62 listed in an Aberdeen census of 1901 with a daughter Elizabeth Rust where Julia states she was born in India which fits in with the story. Both Julian Rust and his father Thomas Rust made grand portraits in Mussoorie. One of them, of an English lady was published as cabinet card in 2009. I am also posting it’s photograph.
Later in 1930’s when Nawab Istafa Khan saw the portrait in the showcase of his shop he offered to buy it. Julian initially refused as he himself had developed a great attachment to it. But when Istafa Khan insisted much, he asked for five hundred rupees a huge sum in those days. Which Istafa Khan was initially reluctant to pay but finally agreed to purchase. During the Time when Nawab Istafa Khan purchased the portrait (In 1930’s) from Julian Rust, he was probably completing his career as a photographer. As we can deduce from historical accounts. So perhaps one reason the old aged Julian Rust agreed to sell the portrait of Nathji to Istafa Khan is, that in those days he as in the process of closing shop. Shree Nathji’s portrait gave him great bliss as long as it was in his studio. And when he was in the process of closing it, that portrait got him five hundred rupees, which must have been an important sum for him at that time when he was closing his studio. Nathji created such a pastime that Julian was helped financially and the portrait beautifully passed it to his devotee Istafa Khan.

Priya Nath Mehta  - Another earth shattering discovery! Congratulations!! Only you were capable of this wonderful and fascinating research!
Posted by Jimmybaby at 06:33